Mississippi’s Speaker of the House Philip Gunn was on the coast Thursday talking in front of packed house of Gulf Coast Business Council members. He gave everyone a look back at the past legislative session, a look at what’s happening now in Jackson, and a peek ahead to the future.

“Human trafficking is a problem all across the nation, and here in Mississippi. The I-10 corridor is one of the main thoroughfares where this type of activity is happening,” Gunn said. “I got a passion for that a few years ago, and we got a bill together to work on human trafficking that we passed, and I think it will work.”

Gunn said he was pleased with the work state lawmakers put in to give teachers a pay raise, despite the recently reported trouble in processing the raises.

The @Interior announced that MS will receive $31.7 million in revenue generated from offshore federal oil and gas leases as part of Phase II of #GOMESA. This is great news and I’m glad to see this crucial funding reach our state. https://t.co/qSIoAr6dc5 pic.twitter.com/wbQTdwPw6r

This new legislation provides the Mississippi Department of Corrections (MDOC) a new way to cut down on the widespread use of contraband cell phones in the state prison system.

The new law allows a circuit court to issue a court order to disable a cell phone determined to be used by incarcerated individuals.

The Clarion Ledger reports Republican Delbert Hosemann spoke Thursday to University of Mississippi journalism students in Oxford. In a recording sent to the newspaper, one student asked Hosemann how close he and Cochran are. Hosemann replied: “He’s deceased, so I’m not real close.”…

…Cochran retired from the Senate amid health concerns in 2018 and is living in Oxford. A former chief of staff, Brad White, says he saw Cochran Thursday “and he’s very much alive.”

Hosemann is running for lieutenant governor. In a statement, he said: “I made an improper comment, and I sincerely apologize.”

Senator Cochran: Thank you for your military and public service. To paraphrase Mark Twain: I’m glad reports of your death have been greatly exaggerated!https://t.co/NwmGuj0GaC

Judge rules in favor of candidate in residency dispute with State Rep. Williams-Barnes 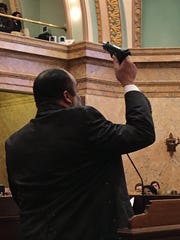 Mississippi’s gun laws in less than a decade have changed from fairly restrictive to among the most permissive in the country — including a 2016 provision making Mississippi one of 16 states that allows “constitutional carry,” or carrying a concealed firearm without a state-issued permit.

However, there are still caveats on how and where someone can carry a concealed gun without a permit.

New gun laws have brought some confusion among gun-owning residents and even law enforcement about what the law allows or restricts. In some cases, laws appear to conflict or leave room for interpretation. Many of the state’s newer gun laws have not been thoroughly tested by the courts.