On Saturday, Legislators began the process of filing measures to address the removal of the state flag. The Mississippi House of Representatives voted to pass HCR 79 by a vote of 85-34. 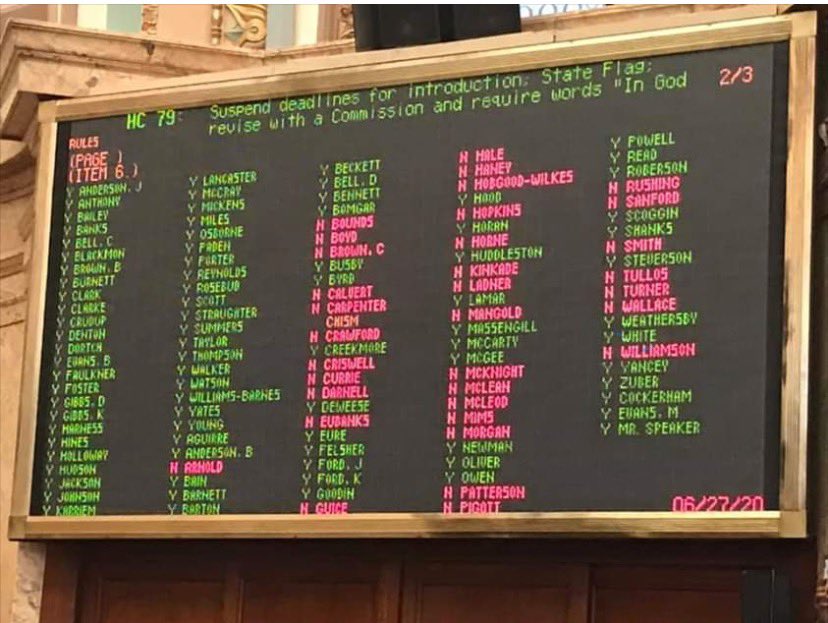 The resolution to suspend the rules passed out of the House Rules committee which is chaired by Rep. Jerry Turner (R). Over the last several days, there has been mounting anticipation as the state and nation watched and waited for this action.

The resolution will do the following:

The bill was presented by Rep. Jason White (R) on the House floor.

“Earlier this session we forcefully said this body has a duty and a right on certain things. I submit to you that this is one of those things,” White, the Speaker Pro Tem, told the House. “People voted for you and me, you signed up for this,” adding, “We cannot shirk our responsibility.”

Only one amendment was offered by Rep. Jeffery Guice (R). It was to allow the people to vote on the removal of the flag in November. It was voted down by a loud “no” vote from members. Afterwards, two Representatives spoke for and against the bill.

“Now is the time to let them [the people] speak. A no vote of the resolution is not an endorsement of the current flag; a no vote to HCR 79 is to say ‘I want the people to have that choice,'” said Rep. Chris Brown (R).

Rep. Edward Blackmon (D), who is a long time member of Legislature and has been a part of the flag debate in years past, sat on the Rules Committee and voted to pass the bill to the floor.

“That when we see it [flag] we know it’s about us, not just some of us,” said Blackmon on the floor. “This is a good piece of legislation, I wish I had written it but I can tell you I’m ready to vote for it. I ask you to support the resolution.”

The resolution must now go to the Senate for consideration before a general bill can be filed to actually initiate the removal of the flag. The possibility for more amendments to come forward is still high, meaning the debate could continue for several more days.

HCR 79 by yallpolitics on Scribd

Early Saturday morning as members began arriving at the Capitol, Governor Tate Reeves released a statement on social media saying that if the Legislature sends him a flag bill even as early as this weekend, he will sign it.

“The legislature has been deadlocked for days as it considers a new state flag. The argument over the 1894 flag has become as divisive as the flag itself and it’s time to end it. If they send me a bill this weekend, I will sign it,” Reeves said.

Numerous business organizations and the head coaches of all 8 public universities rallied at the Capitol on Thursday to implore legislators to make a change to the flag.