Marco fizzles out, Laura up next

Tropical Storm Marco thankfully underwhelmed meteorologists Monday as it fizzled at due to wind shear.  It is now considered a remnant as it moves westward across the Gulf.

Laura, however, is expected to reach Hurricane strength later today. Its current projected path continues to take it to the Louisiana/Texas border, with landfall likely early Thursday morning.

The Mississippi Legislature will convene Monday at 4:00 in what appears to be an attempt to finally set the Department of Marine Resources (DMR) budget for the 2021 Fiscal Year.

What is typically not a controversial state agency budget has caused disagreement between lawmakers and the Governor’s office. The opposing opinions surround the Gulf of Mexico Energy Security Act or GOMESA funds. These federal dollars come from a revenue-sharing model for oil and gas produced in the Gulf of Mexico and split between Alabama, Louisiana, Mississippi and Texas.

In an interview with CBN News over the weekend, Dr. Birx discussed topics ranging from the safety of in-door church services, coronavirus vaccinations and the act of voting in November.

On the issue of voting at the polls, Dr. Birx said that it has been safe for her to go into Starbucks and pick up her order. “If I can go into Starbucks in the middle of Texas and Alabama and Mississippi that have very high [coronavirus] case rates, then I can’t say that it would be different waiting in line in the polls.”

Today MSDH is reporting 511 more cases of COVID-19 in Mississippi, 8 deaths, and 173 active outbreaks in long-term care facilities. The total of #covid19 cases for the year is now 78,405, with 2,248 deaths. Case details and prevention guidance at https://t.co/QP8mlJ41AN pic.twitter.com/y1G04nbc6Y

It’s been nearly 20 years since most Mississippians have heard from former Congressman Mike Parker.  Hence it is not of super substantial political importance in Mississippi that he is now endorsing Democratic Presidential nominee Joe Biden.  But there is a growing trend of moderate/liberal Republicans publicly voicing support either for Joe Biden or against Donald Trump.

Parker is now part of more than two dozen former Republican Congressmen who announced their support for the former Vice President in a release touting ‘Republicans for Biden,’ an effort headlined by former Arizona U.S. Senator Jeff Flake, an outspoken critic of the President Donald Trump.

All 56 State and Territorial AGs Call for Increased Funding and More Flexibility.https://t.co/9XgYugvJDM

According to an NPR analysis, 315 absentee ballots were rejected in Mississippi’s March presidential primary. 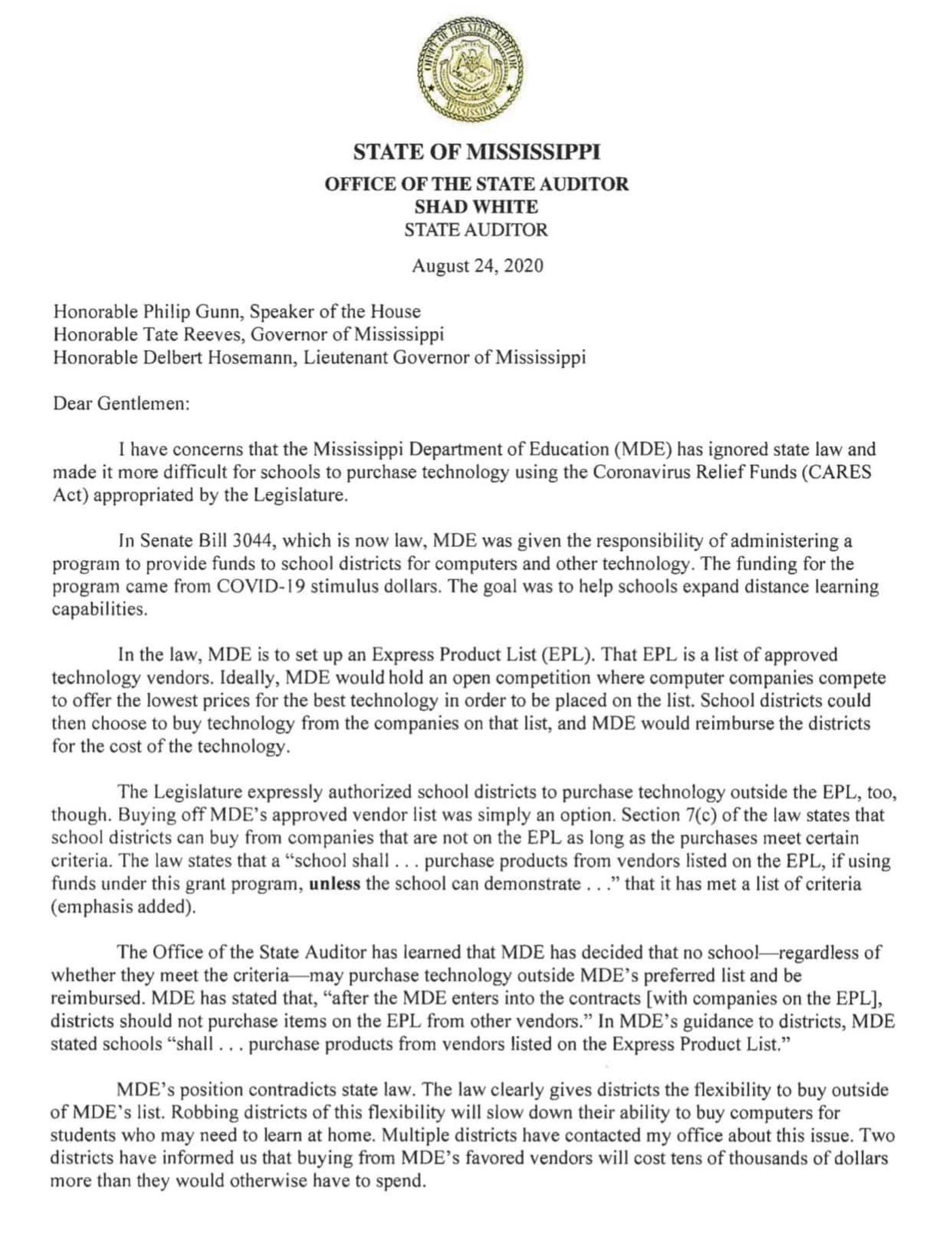 State Auditor Shad White has written a letter to Governor Tate Reeves, Lt. Governor Delbert Hosemann, and Philip Gunn, Speaker of the House regarding Coronavirus Relief Funds and the Mississippi Department of Education.

White says he has concerns MDE has ignored state law and made it more difficult for schools to purchase technology using money from the CARES Act.

White says the goal of the money was to help schools expand distance learning capabilities. He says MDE is forcing school districts to choose companies on their preferred list and locks out some vendors.