The first term Democrat only reaches 50% approval in one state.

A national survey gauging President Joe Biden’s approval was released on Tuesday by Civiqs. It shows that respondents in only four states approved of his job performance, with only one state getting him to 50%.

Overall, 56% of the country disapproves of how President Biden, a Democrat, is handling his job just over one year into his first term.

Here in Mississippi, Biden is drowning. Only 27% of respondents believe the President is doing a good job, leaving 64% of Mississippians polled expressing their discontent.

But Mississippi does not have the highest disapproval of President Biden’s job performance. That designation goes to West Virginia where Biden’s disapproval sits at 78% of respondents.

Given those numbers, it is no wonder why Mountain State U.S. Senator Joe Manchin, a Democrat, is bucking his own party’s leader and standing his ground against far-left policy positions being pushed by the White House.

The 5 states where Biden’s disapproval is highest are:

The President is even under water in liberal states like California and New York, by -8% and -9% respectively.

The four states where Biden’s job approval outpaced his disapproval were: 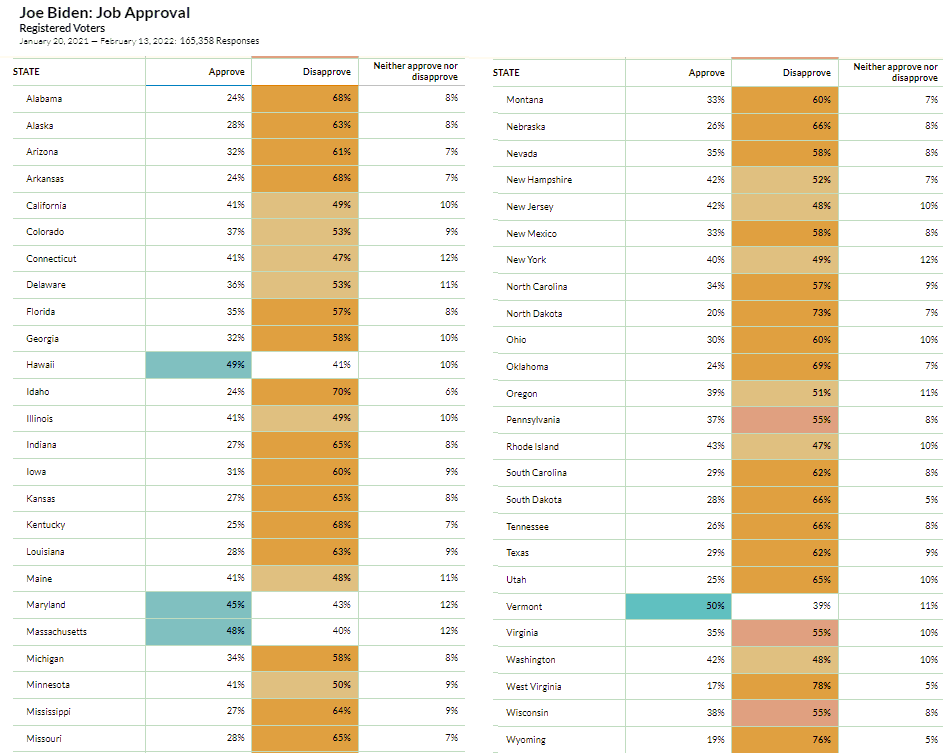 Whether men or women, President Biden’s disapproval is shared across all age groups and education levels.

Biden fails with both self-identified Independents, with 66% disapproving of his job performance, and the largest emerging voter bloc, Hispanics, with 45% unhappy with the President.

However, Biden does continue to poll well with self-identified Democrats (72% approval) and Blacks (62%). Those are the only two groups where the President remains somewhat popular, at least for now. The national survey by Civiqs was taken between January 20 and February 15, 2022, representing over 166,000 responses. Find out more about this poll by visiting here.