“Mississippi needs some relief and sanity from the PSC. Commissioners shouldn’t be utility or Green Energy puppets,” Williams writes.

The President wants convenience stores to cut profits and fix high gasoline prices. Can they? Distribution and marketing account for 5% of gasoline’s price at the pump (WSJ “Bidenomics 101” July 5, 2022). That was 22 cents a gallon in May. Out of that, labor, freight, utilities, real estate, and credit card fees took 10 cents. So, store operators and local distributors got 12 cents for their efforts. They can’t fix the President’s gas problem with 12 cents. 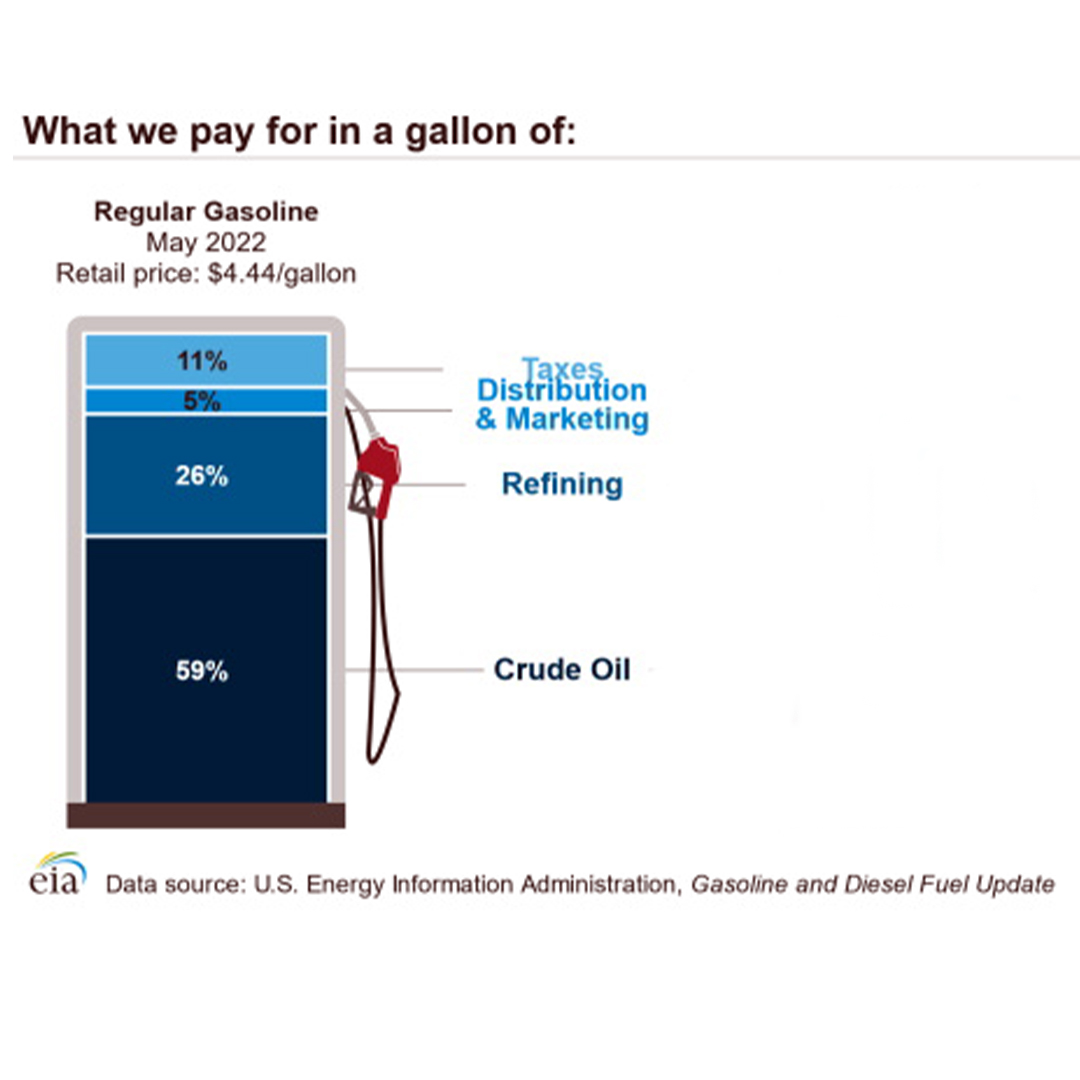 Tax collectors took 49 cents without breaking a sweat. They can’t fix high prices either. Neither can Big Oil. Majors own fewer than 5% of the gas stations in the U.S. They quit retailing because there’s no money in it.

How about refiners? They make gasoline, diesel, jet fuel, fuel oil, etc. from crude oil. They’re making money now. The U.S. crack (not that kind) margin was a record $55 per barrel (42 gallons) in May. That’s the difference between revenues from refinery products and cost of crude oil. It varies with crude price, seasonal demand for products, and refinery capacity. It’s been high recently despite high crude prices because of summer gasoline demand and a shortage of refinery capacity. Why a shortage?

Thirty-year crack margins (excluding the Ukraine disruption) averaged about $10.50 a barrel. That doesn’t justify investments in new refineries. They are expensive to build and hard to permit due to government regulations. No major refinery has been built in the U.S. since 1976.

There’s more money in crude oil. Prices are high. Russia makes more from higher crude prices now than before Ukraine. The Saudi’s do too. U.S. crude producers, too – despite efforts to shut them down. What caused high crude prices?

The President favors the liberal world over America’s interests. Globalist politicians shutter reliable fossil fuel and nuclear plants in favor of unreliable renewable energy. California and Texas lead the way to electric grid chaos and blackouts from intermittent wind and solar power. Why?

The answer is: Green Energy Madness. That’s the belief that electricity from wind and solar will supply our needs. (Solar generated 2.8% of U.S. electricity last year.) And belief in the theory that burning oil, natural gas, and coal will lead to future climate catastrophes because it releases carbon dioxide to the atmosphere. That’s a theory. Not a fact.

But it is a fact that England and Europe suffer energy shortages because they shut down their nuclear plants, natural gas, and coal plants to rely on unreliable wind power. They will suffer more this winter. The European Commission knows this. So, it now says nuclear and natural gas are Green. It’s absurd to think that labeling natural gas Green will decrease its carbon dioxide emissions. And save the planet. But it may keep some Germans from freezing.

The U.S. has energy shortages too. They haven’t caused electricity rationing yet. Just higher prices for electricity, gasoline, natural gas, food, and other essentials. Mississippi is infected with the madness. Here are two recent examples.

Entergy had an intermediary build a $150+ million solar plant for it in the Delta. Entergy says the plant will provide electricity to 461,000 Mississippi customers. That’s not true. It looks like a bait and switch scheme. The electricity is not going to its Mississippi customers. However, the plant’s cost is – plus a return kicker for Entergy’s shareholders. Entergy’s customers will help pay for someone else’s electricity. Whose?

But it’s not a stretch to understand why Entergy likes the guaranteed profit on its expensive investment when Mississippi customers pick up its cost. Entergy plans to invest another $1 billion in more solar plants. That makes profit sense for its shareholders. But no sense for its customers.

It makes no regulatory sense for the Mississippi Public Service Commission to bless the scheme. The PSC’s job is to assure customers affordable reliable electricity (i.e., electricity from plants that run 24/7 – not eight hours on days when the sun shines).

The PSC has also blessed shutting down Southern Company’s coal plant in Jackson County. Why? Because Southern has too much generating capacity. What? Yes, because the PSC blessed $1.3 billion to convert Southern’s failed Lignite Plant to run on natural gas. And stuck customers with the cost. Looks like the PSC puts utilities first – not customers.

But last month the U.S Supreme Court (West Virginia v. EPA) said the EPA has overreached and lacks authority to regulate carbon dioxide emissions and other things. This ruling provides some relief from the regulatory administrative state. And some energy sanity.

Mississippi needs some relief and sanity from the PSC. Commissioners shouldn’t be utility or Green Energy puppets. They should regulate utility monopolies – not empower them. The Governor can provide some relief when he appoints the new Executive Director of the Public Utilities Staff (PUS). It was created to be a PSC watchdog after Grand Gulf scandals sent two commissioners to prison.

Customers need a Doberman as Executive Director. Hope the Governor appoints one.