WRITTEN BY JOHN COUVILLON OF JMC ENTERPRISES/JMC ANALYTICS AND POLLING

Overall, polling results since early September show a slight and consistent “reddening.” Will this trend continue?

America is now in the midst of election season and are therefore focusing on House, Senate, Governor’s, and other races that will be on the November 8 ballot. In fact, in several states, people are actually early voting in person (November 8 in Louisiana is a PRIMARY day, although any candidate who receives at least 50% of the vote will be “elected” that night).

And while people are tuning into the races now, polling has increased in frequency – from 116 poll results in early September to 170 in the latter half. JMC will focus on U.S. Senate races today.

Publicly available polling data for all Senate races has been compiled from September 16-30, and since we also have available polling data for both late August and the first half of September (when people DID start to focus on elections), we have some trends that can be determined across the country. As polling data is compiled for a given time period, it is then averaged for each Senate race, and with the average poll showing for each candidate, here’s how JMC rates each race:

(1) Safe Democratic/Republican – A candidate either has a polling average of at least 50% and/or at least a 10-point lead in the polls;

(2) Lean Democratic/Republican – A candidate has a 3–9-point lead in the polls;

(3) Tossup – A candidate’s lead is less than 3 points in the polls;

Given those criteria, this is the “state of the US Senate” as of the writing of this article (and based on September 16-30 polling data consisting of 51 Senate race polls): 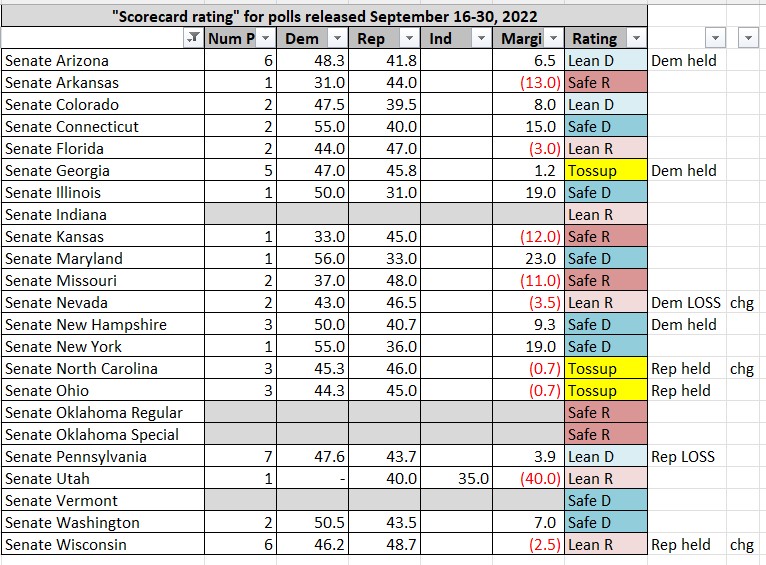 Commentary: Since the last scorecard, there have been three ratings changes, and those changes marginally benefit the Republicans:

Overall, polling results since early September show a slight and consistent “reddening.” Will this trend continue? We will revisit this topic in a couple of weeks.

While it is true that Election Day isn’t until November 8, in person early voting has already started in eight states (Illinois, Michigan, and Virginia are the latest bigger states that are in person early voting now), while other states (such as Florida, Illinois, New Jersey, North Carolina, and Pennsylvania) have sent out their mail in ballots. As of the writing of this article, here’s where we stand both with mail ballot requests and actual voted mail ballots:

(In other words, over 110K have already voted (early voting in Louisiana commences on Tuesday, October 25))

Mail Ballot Requests as of 10/2 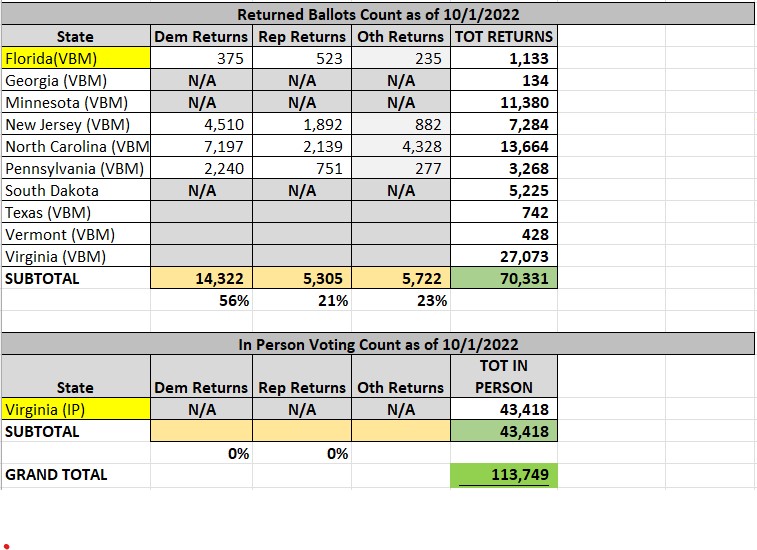 While we are actually in a lull right now, the “early voting sprint” will start in a week and continue throughout the month almost all the way to election day.

Why do these numbers matter? As mentioned in this analysis, 72% of the vote was cast before Election Day, and even considering that some of that was caused by the pandemic’s changing voting behavior (whether voluntarily or by government decree), JMC believes that there has been a permanent shift to some extent of people wanting to “get it over with” and vote before Election Day. This mindset WILL affect when people are making up their mind about who to vote for, and both candidates/consultants would be wise to take this new paradigm into consideration when planning their messaging/get out the vote efforts.

There has been slight movement “to the right” in Senate races. Will this movement continue? JMC will continue to analyze existing polling and give updated assessments throughout the moth.