Rare is it for me to wade in on national political affairs, but having watched this bailout debacle crash in slow motion for six months, I feel it’s finally time to comment.

First of all, let’s call this damn thing for what it is. It’s a spending bill and a political patronage payoff. Unions, social programs and other liberal interests that feed at the trough are getting theirs after twelve or so years in the political wilderness.

A $900 billion government spendfest for this economy is like prescribing a course of chemotherapy for the common cold. Just like people get occasionally ill, so do economies or just about any other system you can think of (think global cooling). No complex system can grow in perpetuity without interruption or cycling. It’s a normal thing, and in an economic setting it usually weeds out “knuckleheaded” behavior. I went through the first recession of my business life in the tech wreck of 2000-2001. It was like everyone had lost their minds. People were making 40% per year in the stock market just months before. There were crazy valuations on companies and value was unsustainable. Capital was extremely cheap and money managers kept pouring it in the system as if the slot machine would pay off every time. People woke up and said, “Hey, this is crazy”. The market corrected, a lot of companies shut down or retooled, and the economy has by and large been in positive territory ever since.

In fact, about every 6-10 years, our economy takes a breather and retools. It has done so for as long as we’ve been tracking it. See? 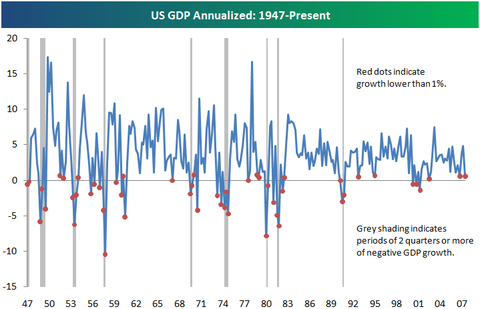 What you will notice is that the wild swings that we used to have in our economy have been largely minimized. This is likely due to better control of inflation and money supply. However, it is folly to think that we somehow can eliminate a recession, which is all this is. Now, President Obama (Prez-O), the Democrats and their willing accomplices in the media would bemoan this economy as “the worst since the Great Depression”. Only a fool would believe it. You need go back no further than the end of the Jimmy Carter years/beginning of the Reagan years to see a recession (not a depression) that was worse than our current economy by every objective measure. Inflation was at 13.5% – the prime lending rate was at 21% – unemployment was at 7.5%. That was bad. Currently, we are about 2%, 4.5% and 7.5% respectively. It’s just not that bad. Now, when you are unemployed, I know the unemployment rate feels like 100%, but our economy, historically speaking just ain’t that bad.

Now, onto the the Spending Package. This pork laden boondoggle the $900 billion chemotherapy course for our common economic cold. In Mississippi, we seem to be of two minds about it. Senators Cochran and Wicker have been steady in their votes against any bailout. Rep. Bennie Thompson has been on the bailout bandwagon. Rep. Gregg Harper and Rep. Gene Taylor have consistently opposed.

Rep. Travis Childers has had an about face, changing his vote and stance on the bailout after the last election. In other words, he is for it after he was against it . . . twice. While campaigning for his permanent seat in August, he voted twice against similar bailout packages. However, this week, he voted for the new Obama-backed stimulus. This was a straight political bet by Childers on Obama and Pelosi. If the economy still has a bout of nausea from the economic chemo in 2010, Childers may wind up holding the barf bucket.

So, what do we do? Well, there have obviously been lots of ideas. I am not as much of a “Rush Limbaugh” guy as I used to be as he has gotten a little more caustic in recent times, but I think he is right a lot of the time. He had what I think is the perfect idea for true economic stimulus . . . suspend the Capital Gains Tax for one year. Currently, the capital gains tax rate is about 20% and yields about $130 billion of tax revenue per year. There are billions of dollars in property and investments that are artificially penned up due to people not want to pay taxes on capital gains. Think of people who have inherited stock or property from long dead family members and people who by a variety of means have come to own assets that have appreciated in value. And it is not just rich people that would benefit. If that tax was lifted, there would be an immediate asset renaissance. Property, stocks and other capital items would be sold (and subsequently purchased with sales proceeds) like crazy. The stock market would probably jump about the 20% or more to reflect the capital gains savings by individuals, and it would be an absolute frenzy. Companies would have new capital to invest and jobs would be created faster than as the result of any government program. It would be a direct and immediate stimulus to the economy, the likes of which I am not sure we have collectively seen. It would be like steriods for the common cold.

If creating jobs and economic stability is the goal, put the money in the hands of the people in the easiest way possible . . . let ’em keep what they’ve earned and encourage them to spend it like never before.

Our economy is a fickle beast. When it is the most healthy, it is the reflection of millions of tiny individual purchasing decisions (aka consumer confidence). No central government can mandate that you feel better about your personal financial situation. In fact, if the government is talking about a bailout, that is likely to have the opposite of the intended effect as everyone will feel worse about the economy and not buy that extra thing, go out to dinner, etc. People hoard money if they perceive times to be lean.

Prez-O, take the shackles off. Minimizing taxes is a good thing. The “invisible hand” works. You talked about a “tax cut for 95% of Americans”. Let’s make it a smooth 100% and get this thing back on track.

NCAA threatens to withhold events over transgender state laws. Some say to Hell with the NCAA.

Economic interests, healthcare and appropriation of federal funds all high priority for Hosemann in 2022