Eighty one minutes before the filing deadline last Wednesday for the Ward 1 City Council special election to succeed Jeff Weill (who was elected to Hinds County Circuit Court in November), local activist Patricia Ice filed her paperwork to qualify. Lobbyist Quentin Whitwell had long since qualified and submitted the requisite 50 signatures of valid electors from Ward 1.

Not long after the filing, some scuttlebutt started circulating around City Hall. Several of the signatures on Ice’s qualifying statement, particularly those from husband/wife teams, looked like they were written in the same hand. After the Hinds County Election Commission got finished with Ice’s application, they invalidated 9 of her 60 signatures due to those people not being registered voters or not residing in Ward 1. That brought her down to 51 valid signatures on her petition (shown below). Should two more signatures be invalidated, Ice’s petition would presumably be disqualified and Whitwell would immediately be certified as the winner.

Here are signatures from Cecil and Maude Wright

Now, here are their signatures from Nov 2011. Notice Cecil Wright’s signature from two months ago is substantially different.

Here’s another signature from Ronald Potter (courtesy of Kingfish). Obvious discreptancies between the two. 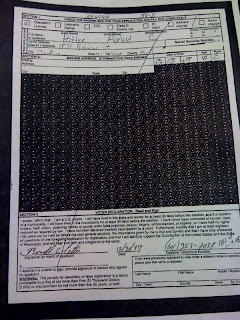 Cathy and Larry Ambrose information is in the same hand. Larry Ambrose’s first name of his signature is fine, but the last illegible. If this were the only instance, it would not raise much of an issue, but when taken as a whole, it now looks suspect.

Alice and Roy Blackmon is sort of the same deal as the Ambroses except Roy Blackmon’s signature looks a lot like his wife’s.

Here is the full petition.

I’m certainly not a handwriting expert, but in looking at the signature cutouts individually against the rest of Ice’s petition, it’s my opinion that at least a few people did not sign their own name. You make your own call. It’s interesting the three of the four signature pairs in question all occurred on the same page (page 8) of the petition. Certainly, these folks have voter registration cards on file, and I would think that someone would want to compare all of these signatures against the voter registration cards on file.

The truth is that regardless of what happens here, I don’t think it’s going to matter much. I believe that Whitwell will beat Ice handily on February 15th, if this thing goes that far. But if people have fraudulently signed an application, I think that Hinds County election authorities and possibly even the Secretary of State should engage and investigate. Even if it’s only one person. With Voter ID on the ballot in November of this year, this appears to me to be more evidence that there are some folks out there willing to bend and stretch the voting process to suit themselves.

As full disclosure, my company has made a reportable contribution to Quentin Whitwell’s campaign.

Amazon announces first ever solar projects in U.S. – Mississippi one of three locations