The world watches West Virginia, but it’s Mississippi that matters

Tonight, forget about West Virginia. The contest there between Hillary Clinton and Barack Obama is fraught with as much tension as a soccer match with 4-year-olds.

They’re just kicking the ball around. Any goals will be meaningless, and even the loser gets a trophy at the end.

No, turn your eyes South. The real political hacks will be watching northern Mississippi, where Democrats will try to snatch a third U.S. House seat in a row from Republicans.

Republicans say Mr. Obama’s liberal values are out of place in the district. But for many Democratic veterans here, the tactic is a throwback to the old and unwelcome politics of race, a standby in Mississippi campaigning.

Former Gov. William Winter, a Democrat, expressed shock at the current campaign. “I am appalled that this blatant appeal to racial prejudice is still being employed,” said Mr. Winter, who lost the 1967 governor’s race after his segregationist opponent circulated handbills showing blacks listening to one of his speeches. Mr. Winter went on to win the governor’s office 12 years later.

“I had thought we had gotten past that,” Mr. Winter said. “That was a tactic that was used against me in the 1960s.”

They obviously have not seen this handbill distributed courtesy of the DCCC: 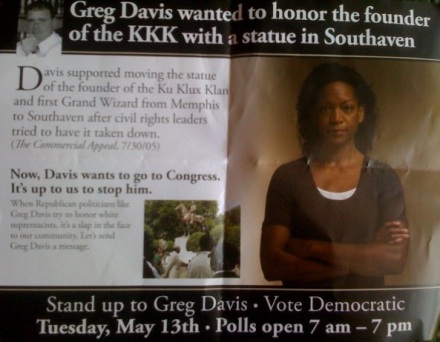