Ten states were scrambling Monday to pass budgets before a Tuesday deadline, with a handful — including Arizona, Indiana and Mississippi — facing the possibility of partial shutdowns if their legislatures don’t act in time.

Sales-tax revenues also have swooned, leaving 48 states with a combined revenue shortfall of $166 billion in the coming fiscal year, according to a report released Monday by the left-leaning Center on Budget and Policy Priorities.

“States are in uncharted territory,” said Susan K. Urahn, managing director of the Pew Center on the States in Philadelphia, citing “both the precipitous nature and size of the drop in revenues.”

All but four states begin their fiscal years on Wednesday, and all except Vermont require that their budgets be balanced. States without budgets in hand include California, Pennsylvania, North Carolina, Delaware, Illinois, Ohio and Connecticut, where Gov. Jodi Rell, a Republican, has said she will veto the budget passed by the Democrat-controlled Legislature.

Mississippi Gov. Haley Barbour, a Republican, called the Legislature into special session Sunday to deal with the budget. “Everyone should agree we have an ox in the ditch,” he said in a statement.

He exempted Medicaid from the budget deliberations; financing that health program has been a key sticking point in negotiations with the Legislature.

If a budget is not enacted by Tuesday night, the matter may end up in court.

Attorney General Jim Hood, a Democrat, said in an interview Monday that he is prepared to sue the governor should he try to authorize certain kinds of interim spending in the absence of a budget. The state constitution allows some agencies to spend money to perform core duties, Mr. Hood said, but others would have to suspend some or all operations. 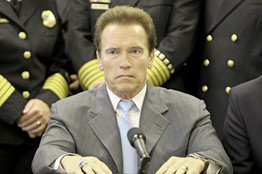